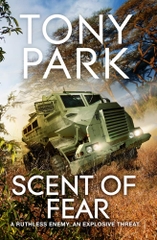 Africa's war against poaching is hard fought in this explosive new thriller from Tony Park - perfect for fans of Clive Cussler, Scott Mariani and Andy McDermott. On a routine anti-poaching patrol, Sean and his tracker dog Benny watch in horror as over-eager rookie Tumi Mabasa is almost killed and her dog gravely injured in the explosion. Along with Tumi and best mate Craig Hoddy, Sean is determined to hunt down the elusive bombmaker who has introduced this destructive weapon to the war on poaching. But Sean is his own worst enemy. Haunted by nightmares of the war and wracked with guilt from driving away his ex-wife, Christine, he soon discovers she and Craig are in the midst of an intense affair. As bombs target Sean's team, can he get himself back on track and win the fight for Africa's wildlife - and Christine - before it's too late?